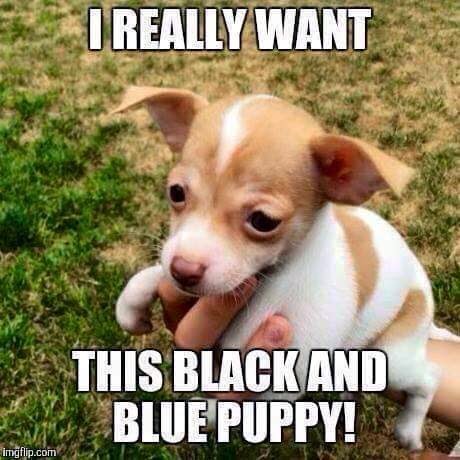 I found this meme on my Facebook feed which is inspired by an article of clothing that has gone viral on social media. It made me think how one’s perspective or how they see things can influence what they think or do. I experience this in my career every day. How much an owner will do for their pet depends a lot on their perspective. I am assuming most people reading this are animal lovers. How does your perspective differ from those who are indifferent toward animals? Do people look at you strange when you talk about your pets as if they were your children? Are there behaviors you exhibit toward your pets that would cause some people to question your sanity? Let’s face it we live in a world where there are people who adore pets and where others couldn’t be bothered. Is it even possible to co-exist with these people? What can we do if we don’t have a choice?

I have been working with animals for nearly 20 years, almost 9 years as a veterinarian and 10 years as a veterinary technician. Therefore, I have been engulfed in a world of animal lovers because of my career. To me it is normal to have long conversations with my dog and cat. I am not grossed out by a dog licking my face (as long as I am unaware that the dog ate anything gross). It does not surprise me when people share how all the pets sleep in their bed. Seeing dogs in designer sweaters and fancy collars is not a shock. My point is, in my world pets are just like children and this is the perspective I work with. In fact, since I am fully engrossed in this world with my career, there was a time I felt everybody thought this way. My first awakening that this isn’t so is in a discussion with a relative who was inquiring how much people spend on their pets. I was discussing how people will spend hundreds to thousands of dollars on their pet for a life saving surgery. Their response was “What? People do this? I would rather just buy a new pet for that price!” Then there were the discussions about how dogs have no place in their bedroom, or even their house. When I first heard these things I was initially devastated. Okay maybe devastated is too strong a word but I was definitely surprised. I thought how can people think like this? I only knew a world where people kept their pets indoors and treated them like children so hearing this was disappointing. Then I had to step back and look at their perspective. In reference to that famous dress, I had to see why I saw white and gold and they were seeing black and blue. Then it all made sense.

First I had to look at myself and ask the important question. Why do I love animals? I grew up with animals. I had dogs, cats, and rats during my childhood which all were treated well. They had free access to our beds at night (except for the rats of course) and were mostly indoors. All my friends and family who had pets treated their pets the same way so this is what I saw as normal.

So what about people who had a different childhood experience then myself? People who never had pets, or they just stayed outside. People who had pets just for specific purposes besides companionship. It is expected that they would have the same perspective as me? Probably not. It is likely that some of these people are our family members, friends, close associates, or co-workers. How we co-exist is through respect. Respect for other peoples backgrounds, beliefs, and commitments. Having respect doesn’t necessarily mean you agree with it all, it just means that you don’t pass judgment. You don’t show hatred just because things are different. In the big scheme of things, you will always find something different in everybody you know, even your closest family members. Even all us animal lovers don’t agree on everything but with respect within our own group we can teach others it is possible to co-exist. A world with white/gold and black/blue respecting each other even though they see things differently.

What you need to know about Bite wounds: When dogs attack each other
Mar 10, 2016

Can technology help us find our missing pets? A review of the TKstar Pet GPS Tracker
Feb 01, 2016

How to know it’s time to take your pet to an emergency veterinarian?
Jan 05, 2016