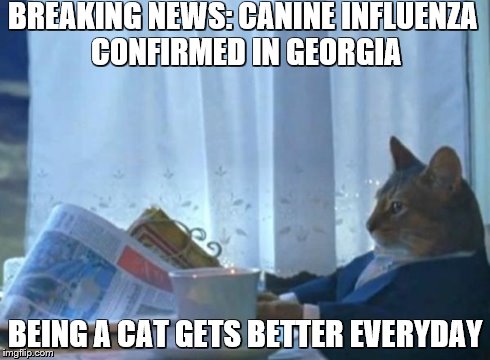 According to the Veterinary Diagnostic Laboratory in Athens Georgia, the first positive case of Canine influenza was confirmed in Georgia. This was determined by testing for the virus from nasal and throat swabs.  The affected dog was believed to have been in an Atlanta boarding facility prior to  showing signs. This dog was coughing, lethargic, had a loss of appetite, and was febrile. The diagnostic lab was only able to determine that the dog has the influenza virus. Further testing will need to be done to determine which strain of the canine influenza virus is involved.  It will be concerning if the strain is the new H3N2 strain that was found Chicago vs the already established H3N8 strain. If this is confirmed as a H3N2 strain, this will indicate that the virus is spreading and can potentially be a health problem for pets. Unlike the H3N8, there is no vaccine available for the H3N2 strain.  Since transmission of Canine influenza can be through airborne particles, the virus can potentially spread quickly through boarding facilities, clinics, and shelters. The laboratory is recommending that dogs that are showing signs of an upper respiratory illness should be tested.  For further information check out the UGA Veterinary Diagnostic Laboratory website.

Update: According to the website they have confirmed the virus is indeed the H3N2 strain that caused an outbreak in Chicago.

What you need to know about Bite wounds: When dogs attack each other
Mar 10, 2016

Can technology help us find our missing pets? A review of the TKstar Pet GPS Tracker
Feb 01, 2016

How to know it’s time to take your pet to an emergency veterinarian?
Jan 05, 2016